The Year I Almost Quit 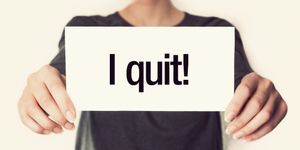 Most times people assume that successful people are "lucky" or that they have everything easy. On the outside everything may appear all together, but trust and believe nothing glitters without an abundance of buff and polish. For every successful person you run across, there's an abundance of obstacles they had to face or are currently facing. Here's a small piece of one of my obstacles from several years back.

It was the beginning of the year 2013. At this point I'd been a Full-Time entrepreneur for about 2 years and I was getting the hang of what strategies worked best for my business. Things were going pretty well so I was finally able to move my family into our own place. Being used to living with in-laws and barely having any experience living on our own (besides a short stint in an apartment), me and my Wife largely miscalculated how different it would be financially. With a 4 figure monthly rent and a host of new expenses, I realized I needed to kick things up a notch. I dug deep and started spending most of my time in the studio working. I missed meals, lost sleep, and whatever else I had to do in order to get work done. Things were going pretty good business-wise but your body can only do so much before it breaks down.

I'm all for grinding hard, but one thing I've learned is how valuable rest is. Because I wasn't taking care of myself, I became very stressed and started burning out. I have a long history of stress/emotional eating so unfortunately I turned to food for comfort. The more stressed I became, the larger I became. The harder I worked, the harder it became to be creative. Many days I remember being in the studio frustrated because it was so difficult to create. I started throwing back 5 hour energy drinks which seemed to boost my performance, but that was only a small bandaid on a gaping wound. Slowly but surely I was winding down.

As the year drew to a close, I was fighting tooth and nail to create. Ideas went from a steady stream to a sporadic drip. The bulk of my income came from Exclusive Rights sales so since I wasn't creating, things started to dwindle financially. I found myself selling off beats at extremely low prices to try and stay afloat, but that only created a bigger problem of clearing out my inventory too fast. No inventory, no sales. Music had became THE priority in my life and I wasn't spending nearly enough time with my family. I was severely lacking as a Husband and Father. As financial issues came into play and I gained more weight from stress/emotional eating, problems started to arise in my marriage. I felt like a failure and less of a man. It seemed like I was stuck in a circle of failure and there was no way out.

I kept these things under wraps so only a handful of trusted people knew what I was going through. Although I maintained a positive exterior, I was dying inside. December 2013 turned out to be one of the worst months of my life. My marriage was on the rocks and I didn't even make enough to cover the rent, just one of many expenses. We were months behind on the car payment and everything was at the brink of being turned off. I started to believe maybe this was it. Maybe it was time to give up music as a business and find a job. After creating music almost all my life, maybe I was washed up and needed to wake up from my dreams. Maybe I didn't deserve my Wife. Maybe I didn't deserve life. These were the things that were going through my head. After going through a bitter-sweet holiday season, I said I was going to give it one more shot at the top of 2014. If it didn't work, I was going to move on.

I went into January 2014 feeling like I had a clean slate. I'd been avoiding calls from the bank concerning our car for months, but I finally mustered up the courage to call them back. The lady explained had I not called, they were actually coming to get the car the following week. Without knowing where the money was going to come from, I set up a weekly payment plan that would avoid them repossessing our vehicle. Knowing of my financial troubles, the lady asked how I was going to come up with the money. I told her I trust God will make a way. Not really a reassuring statement in the eyes of a creditor, but that was all I had to stand on. Over the next few days I had a strong feeling to try out one more strategy that I'd been a bit apprehensive about pursuing. There's a platform called Soundclick that many successful internet  producers are a part of. I'd had an account with the site since 2005, but I never really used it completely. People always used to say how hard it was to break through on the platform so I didn't mess with it. Some producers were also complaining about how it was dead so that pushed me further away from it.  But after realizing most of the top producers were still using it actively, I finally gave it a go. I felt like it was what I was supposed to do.

Soundclick works on a promo based system in which you purchase advertisements in order to put your music in front of prospective buyers. As your music gets more plays from prospective buyers, you rise in the soundclick chart system which further increases your visibility and probability  of sales. The more money you invest in promo, the higher your exposure. I barely had any money so the first week I started small. As I began to make money back, I'd re-invest it into more promo. By the second week I was making larger investments and getting back larger profits. Things were still tight, but I was able to make the car payments that I agreed to. Week by week, I started to see more and more growth. We were able to start catching up on bills and things were finally looking up! Then in February 2014, everything changed. My exposure skyrocketed through the roof and I generated 5 figures in one month, the first time ever! Most of it went towards paying off bills, but I was just happy to be able to take care of my responsibilities! Needless to say, I caught up on the car payments and haven't missed one since! I've been blessed with steadily increasing 5 figure months ever since! 2 years later and things are even better! I have supporters all around the world in multiple countries and it just blows my mind how large my business has grown. Now I'm able to provide the best for my family and spend lots of quality time with them. Just to think, I almost threw in the towel a couple of months before my breakthrough.

I know this is some super personal stuff, but I shared this to encourage those of you out there that feel like you have no hope. Those of you who feel like your dreams will never come to past. I've been in your shoes, several times. No matter what it looks like, keep pushing! For most successful people, it always becomes the worst right before it becomes the best. You could literally be right around the corner from your breakthrough. Wake up everyday and give it everything you've got. It may be that one small thing you keep overlooking that tips the scales.  I hope this inspires someone! Be blessed! -Tone