Be Slow with the Pen 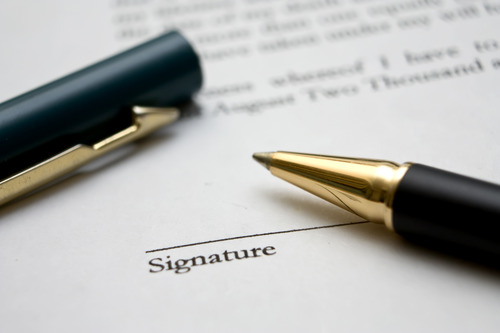 Every artist at some point has had dreams of getting signed. But as the landscape of the music business is changing and more tools are being afforded to indie artists, the allure of a record contract is becoming less and less appealing. Still and yet, there are still some good opportunities out there. The problem is sifting through them all and not falling victim to bad opportunities out of haste. I've been through my fair share of contract related disasters so I thought I'd share a few things to get your wheels turning.

Most times when it's a bad contractual situation, money is flashed in your face. They'll offer all types of things and make all kinds of promises that they will not keep. Earlier in my career, I was offered houses, cars, and lots of other things that I was unfortunately gullible to out of youthful ignorance and financial struggle. Thankfully, none of the situations I got into were so serious that I couldn't get out of them. People will say and do anything to get you to sign on that line. Sometimes a situation can appear totally legit and still be a contractual nightmare. That's why you cannot base your decision solely off of how things look, how you feel about the company, or their track record. The only thing that matters is what's written in black and white. PERIOD! You don't get what you deserve, you get what you negotiate. Don't get sidetracked by the money and sign out of haste. Anytime a recording or publishing contract is involved, ALWAYS get it reviewed by legal counsel. You'd be surprised what type of crazy clauses are buried deep in these agreements! You could be giving away your royalties, publishing, creative control, ownership, and even future earnings on things that have nothing to do with the contract. Now 10% of a lot is better than 100% of a little, but are you happy with that in the long run? What about things that could potentially happen in the future? Do you want to be locked into one situation? Are you willing to take that risk? Now lets look at it from a different angle.

If you stay independent, you have 100% creative control of your art and retain 100% of your profits. You are in full control of your career. If you're the type of person that needs constant guidance and needs to be pushed to do things, this route may not be for you. Getting signed would probably be of more benefit to you. But if you are a business savvy person with extreme work ethic, being independent is a very rewarding route! Getting up and doing what you love everyday without being tied down to a contract is the most liberating feeling! As a creative, the main thing we have is our creativity. Your art is your legacy. When you no longer have creative control over your own art, it takes all the fun out of the process. This is one of the main reasons I thoroughly enjoy being independent. People think that you need millions of fans to live off of your art. As a major label artist, that's true due to the many hands that are in the pot. But as an indie artist, you don't! If you setup your income strategy to include album sales, merchandise, shows, licensing to film/tv, royalties/publishing, session work, crowd funding, non-music related jobs/gigs, and whatever other creative strategies you can think of, you really don't need a ton of supporters. But the beautiful thing is that when your music really resonates with people and you consistently release new music, your supporter base starts to grow in a snowball effect! There's no limit to how successful you can be as an independent creative. There are some people that are highly successful while still retaining their independence! One popular example is Macklemore! He’s had major billboard and sales success without the middleman of a major label! He harnesses the power of social media and truly connecting with his fan base via touring to propel his success. In a recent interview with  techdirt.com he explained why he doesn’t want or need to sign to a major label.

“Macklemore: Yeah, there’s no reason to do it. With the power of the internet and with the real personal relationship that you can have via social media with your fans… I mean everyone talks about MTV and the music industry, and how MTV doesn’t play videos any more – YouTube has obviously completely replaced that. It doesn’t matter that MTV doesn’t play videos. It matters that we have YouTube and that has been our greatest resource in terms of connecting, having our identity, creating a brand, showing the world who we are via YouTube. That has been our label. Labels will go in and spend a million dollars or hundreds of thousands of dollars and try to "brand” these artists and they have no idea how to do it. There’s no authenticity. They’re trying to follow a formula that’s dead. And Ryan and I, out of anything, that we’re good at making music, but we’re great at branding. We’re great at figuring out what our target audience is. How we’re going to reach them and how we’re going to do that in a way that’s real and true to who we are as people. Because that’s where the substance is. That’s where the people actually feel the real connection. And labels don’t have that.

So you sign up for a label. There’s not some magic button they’re now going to push and it means that people are going to like who you are. Or that they’ll identify with your vision or your songs. It actually comes from sitting down, staring at a piece of paper for months or years on end, trying to figure out who you are as a person, and hoping that it comes through in the end. But a label’s not going to do that for you.“

Macklemore said it best! What has worked in the past isn’t necessary anymore and I truly believe as more artists keep their creative control and put out their own authentic content, we’ll start to see diversity and richness in music again. So do you personally think you NEED a major label or are you better off as an independent? Think about it! Be blessed! -Tone Jonez